Today I am sharing an article that outs me as a spiritual person and which I have written with other spiritually inclined readers in mind. However, I think that even people who consider themselves secular, atheist or realist can get something out of it, so here it is:

I have been noticing a recent trend on Facebook to focus on complaints, victimhood and generally the negative. Even spiritual teachers and people who walk a spiritual path seem to resort to denouncing and pointing fingers. And I have caught myself doing the same several times.

It’s understandable. There are many things in our world that are far from perfect or even desirable. But is focussing on the negative really helping us to shift our energy towards a more positive life? I don’t think so. Facebook makes it easy for us to post and share stuff without reflecting on it first. But shouldn’t we be the ones who deal more consciously with this? As people on a spiritual path we know that energy follows awareness. Or we should know.

So let’s focus on the positive.

Don’t get me wrong. I’m not saying we should ignore the not so great things in life – the wars, murders, bad people or even our own issues (and, yeah, if you complain about something on Facebook you can bet it’s yours too).

Again: Let’s focus on the positive: that which we want to strengthen and draw into our lives.

Here’s a list of things I came up with to be in better alignment with my Facebook output.
Let’s start with the Don’ts:

The Dos:
Well, there are not many Dos on my list, as you can see. Probably because the good reasons for sharing something on Facebook are really not many. Chances are good that you will be posting a lot less when following these rules.
Is that a good thing? I think so.
Because you will be contributing to spread the positive and constructive.
Because your Facebook friends will get a much better idea of the real you.
Because it will help you focus on the things you want. Really want.
Oh, and it also makes your profile look a lot less cluttered too.

And so it is!
Many Blessings
Chris

P.S.: If you come up with any Dos and Don’ts that are not on my list, please let me know!
Posted by Christian Turk at 4:56 PM 1 comment: 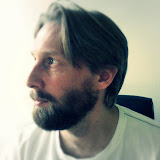 Welcome to my Blog!

I'm a comic book artist and writer. I love science fiction, fantasy, horror, 70s and 80s pop culture, soul music, Star Wars and Jim Henson. All of them probably showing in my art in equal parts. Like me on Facebook or follow me on Twitter.